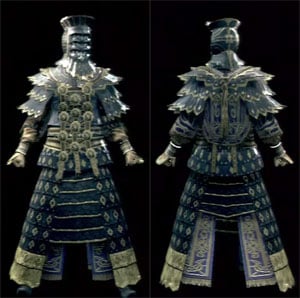 The Channeler
Mighty mages with a trident, wearing the Set of the Channelers armor. They're able to dish out a lot of damage, both physical and magical (with their trident and soul arrows, respectively). They're also able to buff enemies within their range, making their attacks much more effective.

Since a Channeler teleports away upon taking damage, engaging one in melee combat can be a challenge. The key is to wait for one of its longer attacks and then to stagger it. So take a fast weapon that doesn't drain lots of stamina (e.g. a spear) and get close to it. Now wait until it either start to dance or does its trident thrust attack (if it thrusts, get behind it), when it does unleash as many attacks as possible. If it's staggered, it won't be able to teleport away.
A Channeler will die in as few as two or three hits with the Drake Sword. Just remember to pick it off alone - don't engage it in a group of enemies.


Ranged Strategy for the Channeler in the Undead parish :

After you defeat the Tower Knight, go behind the pillars near the Fire Keeper Soul. Take out your bow and shoot the Channeler repeatedly. Hide behind the pillars to avoid its Soul Arrow. Successful hits on the head will stagger him, not allowing him to attack. The zombies will just stand there. This makes it easy to deal with the zombies as the Channeler won't be able to buff them.