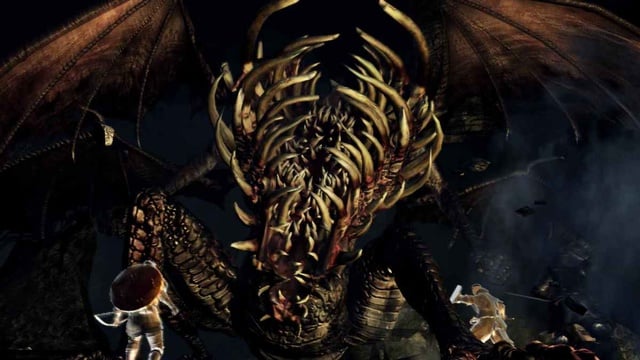 The Gaping Dragon is the boss in the Depths, and gives you the key to the upper entrance to Blighttown.
Note that this boss is optional withthe Master Key as one's chosen gift during character creation, which can be used to enter Blighttown through the back entrance in Valley of Drakes. This is most easily accomplished by simply taking the elevator down from underneath Firelink Shrine, and then circling around into the adjacent building, unlocking the barred door with the Master Key, and then proceeding across the narrow footbridge into the dark cave on the other side. Blighttown's back entrance can also be accessed from the Darkroot Basin entrance into the Valley of Drakes without the Master Key. Enter the valley either by taking the elevator down from Darkroot Basin, or kill Ingward and enter from New Londo Ruins. However, that route is more circuitous and requires you to fight or evade some powerful enemies in the Valley of Drakes in order to double back to the Blighttown cave entrance.
It is also possible to summon certain NPCs to assist with this battle if you are in human form and do not already have 2 player summons assisting. Solaire of Astoria's summoning sign can be located on the floor directly above the short staircase leading down to the boss fog gate. Knight Lautrec's summoning sign can sometimes be found very close to the location for Solaire's, but on the other side of the adjacent pillar (up against the back wall, in the same general area as where the heavy crossbow may be found). Both NPCs are effective during the battle, but Solaire's ability to keep his distance and throw lightning spears may be preferable.
Note: Both phantoms can be summoned at the same time. Having both makes the fight a lot easier since all you have to do is stay out of the dragon's way and pummel it from behind. 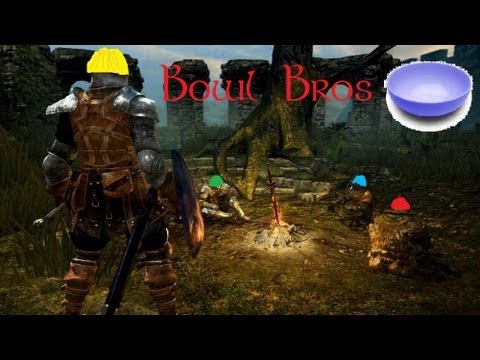 Engorge: The boss will rear back and then slam his exposed ribcage into the ground in front of him, doing massive damage, and stunning himself for a few seconds. This also exposes his head, which causes him to take extra damage when attacked, however, he will almost always follow this with his dash attack.

Dash Attack: The boss will use this attack after Engorge. The ground begins to shake, and he will run about halfway across the room before stopping and catching his breath. When the dash ends you get a chance to attack.

Float Attack: Sometimes the dragon will will float up to re-adjust his body so that he is facing you. When you see this sprint away from him and wait for the dash once again.

Freak-Out Pound: After he lifts his head back up, he will sometimes freak-out and repeatedly attack in front of him. At lower levels, this will most-likely kill you in one hit.

Acid Throw-Up: You have to watch for this as you're attacking the tail. He will sometimes squat down, and an acidic goo will begin to cover the floor within a large radius around him, which will quickly reduce the durability of all equipped items. In order to dodge this you must simply sprint as far away as possible.

Tail Swipe: If you notice the tail start to move as you're attacking it, you must roll away, or block with your shield, as he is about to preform a tail swipe. This is a low damaging attack that hits in an arc behind him and somewhat to the sides. Although individually his tail swipes are mostly an annoyance, on rare occasions he will start spamming them. As they have a large attack arc including parts of the sides of his body, this can be dangerous if you are staggered or knocked down by the first one. Cutting his tail off as soon as possible when the fight commences makes the overall battle much easier, as he doesn't seem to realize his tail is gone and will continue trying to hit people with it, which provides great opportunities to deal damage to him.

Kick: He will occasionally kick the area in front of him after lifting his head up. When he is moving (even just turning in place) his feet can also stagger you and cause minor damage.

Grab: If you are standing near one of his arms, he can grab you and eat you. While you are in the dragon's grasp (or mouth/ribcage), begin rapidly pressing L1/R1 to escape (such as R1/R2 on the PS3). Doing so rapidly can permit you to negate damage entirely, while not pressing buttons will result in death.

When you first enter the room, keep your distance. Either let Solaire or Lautrec (if summoned) run up and tank the boss, or grab the aggro and wait for it to drop its head and to start to do a dash attack. (The ground will start shaking when he does this). After he starts to dash just keep to his left or right to avoid being hit; after this, run behind him to his tail. He will hit the wall and be stunned for a few seconds, this is your chance to do some damage and hopefully cut off his tail. Repeat this, and you should be able to whittle him down without taking any damage. The only change in this fight is the Acid Throw-Up he begins to use when he reaches 33% health. 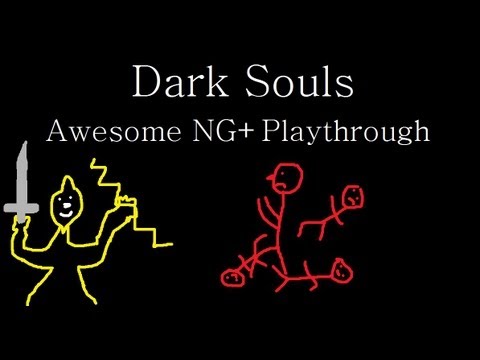