The white winged lion sanctuary watchkeeper, who dreaded the spread of the Abyss.
The Guardian exhibited traits of several animals other than lions, suggesting that it was no ordinary beast, but rather closer to the beings known as Demons."

The Sanctuary Guardian is a huge manticore guarding the entry to Oolacile Sanctuary. It's a powerful creature that functions as the first boss of the DLC area, and a hint for what's to come. 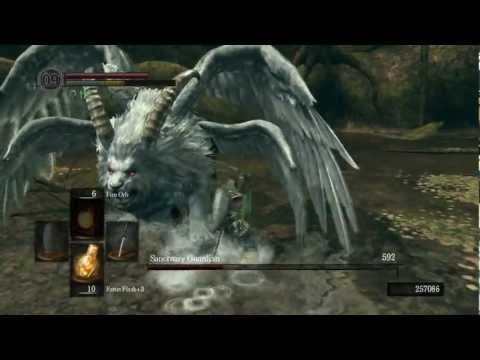 A Lightweight Shield with high stability, decent lightning resist and 100% Physical resist is recommended, such as Dark Knight Shield or Silver Knight Shield. (both 65% Lightning resist) Eagle Shield is also a viable option with it's 95% Phys resist. Combined with a light armor set with high lightning resistance, like Xanthous' yellow set. As for the weapon, a strong weapon with decent recovery speed is a good option to cut off the tail in one or two hit while 2H wielding. (ex: Axes, Greatswords, Halberds)
The fight is relatively easy if you have fast reaction skills. When you enter it will most likely let out a roar and use Lightning Barrage against you. Just sprint/roll to the right to avoid this. Walking with low Burden is a much more effective way to avoid since it's fast enough to evade the barrage without expanding stamina.
Lock on to the Guardian and keep your shield up when you move forward, as it may start bashing immediately. Try to keep to the side of the monster and just wail at it with a relatively strong weapon. I did it with a non-leveled Gravelord Sword at level 59. Be wary of its' poisonous tail if you don't want to destroy it to get the drop. Pay attention to its' leaps, as it's easy to lose your Lock-On when he does so.
NG+: Lightning attacks can be avoided by sideways moves, physical attacks can be avoided by walking backwards, then counter-attack. He has a wave which destroys your block and is followed by a direct attack, so the best would be to avoid the wave with a fast side-roll, though I can´t confirm that, [Linkkit92 on NG, less than 50% burden: the moment I saw the lion standing on its' hindlegs, I rolled once on the side and avoid the wave completely. However, a Lightning Shot followed most of the time] played a >75% equip load tank, with which the unblockable damage was bearable on NG+, about 500-750 dmg.


His tail can only be hit while it rests on the ground, and this only happens after his charge attacks. There are two kinds of charge attack, one where he flies up and then dives down, and another which is a followup to his Wave Crash Attack. Normally people avoid this latter attack by rolling to the side, but the best way to generate more openings to hit his tail is to actually get hit on purpose by the Crash Attack while not blocking (as it will not drain any of your stamina nor deal damage); if you are close to him the beast will then lower his head, preparing to charge - and fret not, he doesn't do this too fast, so you will be able to recover from the stagger and still be able to roll and dodge the charge.

Alternate Tail Cutting Method
Later, when there's two Sanctuary Guardians, equip a bow and go buy a few hundred normal, run-of-the-mill arrows. Warp to the Sanctuary Garden bonfire, and ease up the tunnel and take a shot at a Guardian's tail when a Guardian is visible. They will both attack, and if you're standing too close to the tunnel mouth their lightning attacks can still hit you. Back away until you can usually see the tips of their wings and nothing else. They'll try lightning attacks most often, but they'll regularly run up to the entrance of the tunnel and keep running for a few seconds before they turn and move back into the arena. The stinger of the tail is in plain view and stays in relatively the same spot. Just shoot it with an arrow every time one of the Guardians does this. With patience and positioning, this is a surefire way to get a Guardian Tail, and shouldn't take too many arrows (Doing 150 damage per hit, it took 20-30 arrows on first playthrough), the spares are just in case of misses and in case you want to do it again on the other Guardian.