The Black Dragon Kalameet is one of the new bosses introduced in the Dark Souls: Prepare To Die Edition. He is one of the strongest dragons still alive, and is encountered by the player several times before he can finally be defeated.


Kalameet appears for the first time while the player is traveling through the Royal Woods; he lands in a bridge and watches the player for a couple of seconds before flying away, similar to what the Red Wyvern does in Undead Burg. Kalameet can actually be targeted and hit while briefly perched on the bridge (such as by ranged weapons) but cannot be injured.
He is later encountered at the end of a valley going down from the Royal Forest. Going through the opposite way to where you fight Artorias the Abysswalker, you will find a very small stairway/path going down to the left of an elevator, with a body lying at the top of the trail. Follow the trail down as it curves around to the left and it will take you to the valley of the Royal Forest (the area underneath the small bridge with NPC Marvelous Chester standing at one end). There will be 2 dogs and a treasure to your left at the end of the valley, and turning to your right you will find 3 dogs and a very long ladder going down next to a waterfall, which leads to the place where you find Kalameet for the second time. If you are feeling adventurous, you can also descend the waterfall by falling down a series of rocks protruding from the water.
If you go to the giant valley where you find Kalameet before talking to Hawkeye Gough about him, he will approach you flying from the other side of the valley and fire his fire-breath to you. The fire-breath kills you instantly most of the time, though it's possible to survive one. It's impossible to fight him at this time. You first need to ask Hawkeye Gough's help to shoot Kalameet down so you can engage him in melee. If you venture deeper in the valley you find a message saying: "If only Hawkeye Gough were here..."

You will need to get attacked by Kalameet before Hawkeye Gough will offer to shoot down Kalameet. After you find Hawkeye Gough by unlocking his room using the Crest Key, you have to talk to him all the times you can until you exhaust his dialogues, then close the conversation. If you have not yet found and been set on fire by Kalameet near the waterfall at the end of the valley, you will not be able to ask for Gough's help (you do not need to get killed, but you do need to enounter him near the waterfall). Once you have found Kalameet the second time, go back to Gough and talk to him again; he will now ask you if you need help with the dragon. Say 'Yes.' He will ask if you intend to prevail until the end, say 'Yes.' Then a short cinematic will play showing Hawkeye Gough using his bow to take down Kalameet from the skies.
Now you have to go to the valley again and you will find Kalameet on the ground, though he will still use some low-altitude flying attacks. You can fight and kill him now. Keep in mind that a fog door will appear before his area now. The valley area, including Artorias's arena area, will also re-open for PvP once Kalameet has been shot down by Gough, as Kalameet is now considered a boss for the area. So a player in human form will now able to summon others to assist in fighting Kalameet, or be invaded by other players until Kalameet is killed.
Kalameet's black flame attacks deal both physical and magic damage, and it does not appear possible to completely eliminate the damage even with a good shield (although some buffs such as Great Magic Shield and Great Magic Barrier can nearly do so). But the damage can be minimized by the use of high magic resistance equipment and/or a high magic resistance shield, such as the Crest Shield. High stability greatshields can also be quite effective even if their magic damage reduction is not as high as the Crest Shield.


N.B. : Every melee attack is likely to be followed by Jaw Snaps if the player stayed near.


Kalameet is tough, and patience is required because he only rarely does the tail slam that leaves his tail open to attack. The best way is to get used blocking or avoiding his various attacks (it may take a few attempts) and, once you're confident you can handle dodging or blocking most of the time, begin working for his tail. One of his attacks is a diving charge where he'll flap upwards and then swoop at you and skid to a halt. Stay locked on to him, and dodge once when he's in the air--this should let you evade the attack--and then again to circle behind him so he'll do his tail slam--as soon as you see him hike his tail up, move to your right and it'll slam down on your left. Alternatively, you can just take the tail slam with a high stability shield, an Eagle Shield +14 was beyond sufficient. Break your lock and turn and attack his tail. You'll generally get one chance at a swing and then he'll lift his tail up and leap away or whirl around or so on. Repeat the process; it takes about a quarter of his life bar, maybe little less, to sever his tail. It helps to have 20 drinks of Estus to erase health loss from any mistakes you may make. 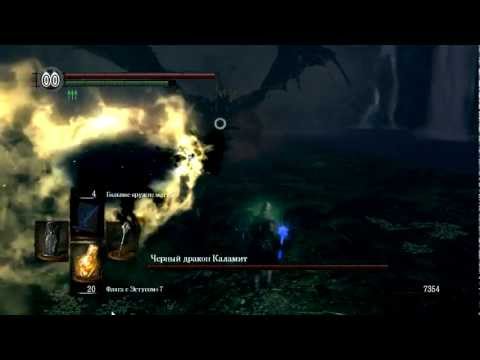