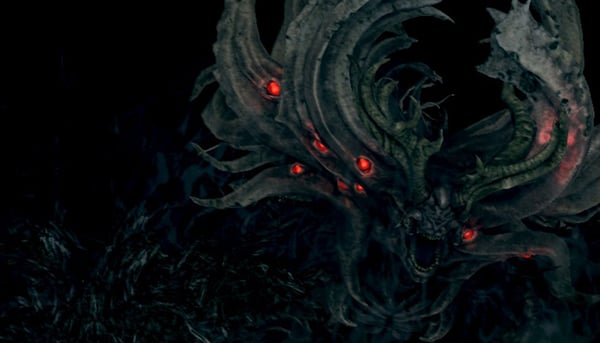 Manus, Father of the Abyss is a final boss of the AotA expansion. While something of a demon in appearance when encountered by the player, Manus was in fact once human. He became the Father of the Abyss when his humanity went wild, but it is not known what caused this. According to the Marvelous Chester, a source which cannot be trusted, an unidentified Primordial Serpent (whether it was Kaathe or Frampt is uncertain) urged the citizens of Oolacile to go delving in the dark of the Abyss, where they awoke this primordial man. Upon awakening, he raged and set to expand his domain while seeking out his precious Broken Pendant. His influence consumed the citizens of Oolacile, whose humanity went wild in turn, mutating them into ghastly creatures. Its inhabitants gone mad, Oolacile was left to fall to ruin. Nothing remains in present day to mark the passing of Oolacile, save Dusk.
When the player finds half of his pendant, Manus reaches out through time and space to reacquire it, taking the player to Oolacile in the process. He also takes Marvelous Chester in the same manner, who may have found the other half of the pendant in another time. While this pendant obviously held some deep meaning to Manus, it is unknown what, the answer long since lost to time.

If you saved Sif in the area before the boss room*, it's possible to summon him to assist you during the battle. There will be a White Summon Sign near the middle of the room that will summon Sif to aid you in his puppy form, although the summon sign can be a little difficult to reach due to the boss's quick attack rates. The summon sign can also be tricky to spot at first, given that your attention will be on avoiding Manus' attacks from the moment you enter the arena. Sif attacks rather slowly for approximately 100 damage on NG but it is extremely difficult for Manus to kill him, and he is thus a suitable distraction for solo players, or for those who cannot find summon signs for Manus in their level range. As opposed to other summons signs, all you need to do is interact with this one to summon Sif, there is no confirmation dialog.

(*From Oolacile Dungeon Bonfire, head down to the first mass of humanity spirits, then turn left and take the small fall off the small ledge onto an illusory floor rather than turn right to fight them. Then follow the ghostly Alvina through the caves until she disappears next to the shortcut to the surface; The last time Alvina disappears, there will be an illusory wall directly behind that you can strike or roll through to open, head in and kill the spirits to save Sif). 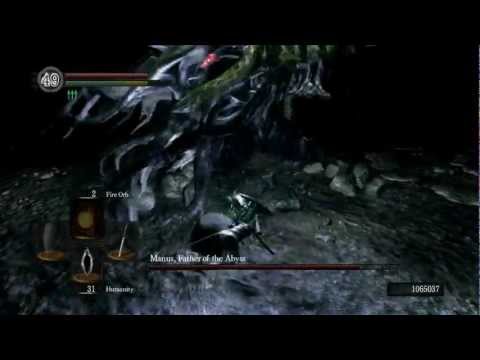 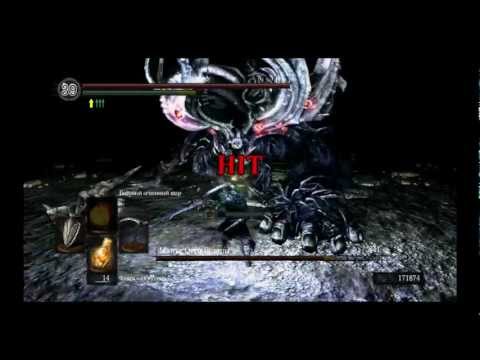 by MysteriousMirrorMan.
Melee:
Use a Green Blossom or equip a stamina recharge piece( Cloranthy Ring, Grass Crest Shield or Mask of the Child), before entering the boss room. The best way to defeat him is just to stay close enough and block his attacks with Greatshield of Artorias or a high stability 100% physical shield(+15 Heater Shield, +5 Black Knight Shield, etc. If you have enough endurance after his attacks, you can hit him once immediately after with a medium speed or faster weapon(No Zweihanders or other UltraGreatswords/etc), or just wait until he does one of the more powerful attacks, as he will have a one to two second delay afterwards.
You must watch your stamina, because if you will fail to block one of his hits in a combo, you will be unable to block the rest of his attack due to the speed. He will also Leap occasionally (even in melee range), this is difficult to dodge and near impossible to block it in melee range (because his hand will land behind your character, and thus your shield will not mitigate it), but it is easily avoidable from a distance.
It is a good idea to watch him carefully, as when the area around him starts glow he will cast one of his Dark energy spells. When he casts, you can see what he casts by his animation, and decide where you will run (Right or Left from Dark Wave, Backwards from Dark Rain or Closer to him if he cast Dark Circle).
Another method to defeat him is just running far from him and waiting, when he will leap, then counter attack. But you will be almost unable to dodge Dark Circle attack. It is recommended that you lift your shield only before a hit, and recover right after. If a low stability shield user constantly block when Manus uses his hand smacking combo (you can predict this move when Manus screams), the player might find himself vulnerable as the damage done can easily eat up a whole stamina bar. Don't be scared to recover stamina between hits since there is decent pause between each hit.
Light weight characters can dodge nearly every attack with their invincibility frames, although some of the attacks such as his frenzy are impossible to dodge due to the incredible attack speed and the massive area that some of the attacks hit, necessitating a hasty retreat when he winds up.

Moments when you can safely attack Manus/Manus' hand:
- He opens his hand and digs some fingers in the ground to violently smack with his hand horizontally. You can strike his body once if you blocked close to him before he initiated the movement, otherwise you'll be too far since the hit would make. Beware, there is another horizontal smack that he uses, but it will be immediately followed by 1 to 3 more hits(alternating between catalyst Smash and hand Smack). The difference resides in the hand slowly "charging" his big smack while entering the ground a bit.
- After a Leap, which is an attack that uses both his catalyst and his fist to smash the ground (blockable by circle-strafing on his right while holding up a heavy shield)
- At the end of the Smacking combo(total 3 fast Smacks, one Ground Smash and one Leap after his scream), Manus uses Leap attack, but only an on-the-spot jump. If you want to avoid having your stamina depleted, just back off while lifting your shield, half the hits will miss you. If you are out of reach of the second to last hit , the final hit (Leap attack) won't hit you and you'll be able to attack his fist.
- If he lifts his free hand in the air and a whirlwind of darkness spins around it, he will smash it downward. Block it while backing and recover to full stamina if you have low stamina, hot once if you have around half your stamina bar/twice if you have near full stamina.
(If you want to get used to his moves you can hold you shield up and stay close to him while circle-strafing around him. Don't forget to lock on Manus as much as you can since it can come off when he backs off or Leaps.)
Keep in mind that the best time to heal and reuse Green Blossom or to land 1-2 hits when he uses his far-reaching vertical smack.

Take note that at under 50% HP Manus seems to use more spells whether you are close to him or not.


Recommendations:
- Havel's Greatshield or any shield with higher Stability should resist the whole Smacking combo/volley of Dark Beads without breaking (tested on NG)
- Less than 50% burden and Mask of the Child(stamina recoveryt)/Green blossoms(but it would take time you could use to Estus flask up/enchant weapon)
- Try to keep your stamina above 50%
- Hold your shield high whenever he's attacking, but don't forget to recover a bit of stamina between each hit if possible(one section of stamina bar is great)
- Never stay between a ledge and Manus, if he does Dark Rain, you will have a hard time avoiding all the magic missiles/avoid the Smack combo
- Magic blocking tips:
*


- Don't forget to repair your equipment if you are defeated by Manus a few times. His multiple attacks will greatly damage your shield's Durability if you blocked all of them.
- Have fun fighting Manus!

Ranged:
It is possible to take down Manus by strafing around the arena while locked on with a good ranged weapon and light armor (tested on NG with high-dexterity build, Black Bow of Pharis+15 and Large Arrows). Mobility and timely dodging is paramount in order to escape his physical attacks. Using the Silver Pendant to block the dark magic attacks in the second phase of the battle is extremely helpful. Summoning Sif during the battle helps somewhat, he should provide time to get in a few free shots or heal yourself if you take a hit.
Note: Upon defeating Manus, a Bonfire appears near the ledge of the fighting grounds and Dusk of Oolacile will also appear near this bonfire. Although she will only weep when spoken to. She disappears back to her original location in the Darkroot Basin after you warp or exit the game and Elizabeth the Mushroom at the Oolacile Sanctuary waypoint will give you three Elizabeth's Mushrooms.