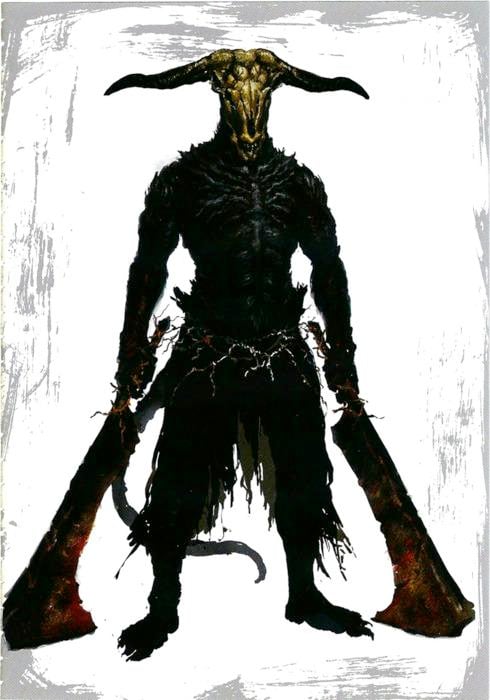 The Capra Demon is the boss of the lower section of the Undead Burg. You can get to him either by going left down to the end of the main street (past the Undead Thieves and Poison Dogs), or by going through the shortcut in the waterway in the Firelink Shrine after you unlock it. 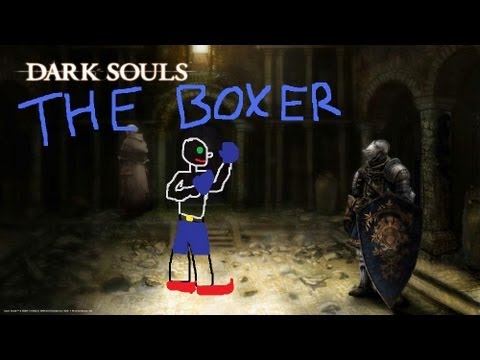 This boss is fairly challenging at low levels, mostly because he does a lot of damage and can break your guard with his heavy attack. His arena is also pretty small, and he has two Poison Dogs backing him up.

The boss is weak to fire, so pyromancy and firebombs do a lot of damage to him. With 15 to 20 firebombs (to allow for misses), you can probably take him out without even having to fight him head-to-head. 8 uses of Fireball will also do the job if you don't miss with any of them. If you are using firebombs, throw them after he jumps from the bottom of the stairs (see Step 2 below) and is walking away to try again. Make sure that he is really walking away, because sometimes he glitches and will turn around when you lock on, making you miss.
Another spell that comes really in handy for mages with shields is Magic Shield, which can be bought from Griggs at the Firelink Shrine after you free him. This spell makes the battle a lot easier.

1. Upon entering, the boss and his dogs will immediately come after you. Circle around to the right (dodge the boss's first big swing) and run up the stairs on the left side of the arena. The dogs should follow you: kill them here. If they don't follow, try to lure them up, but be careful, because the boss can also climb the stairs. Killing the dogs quickly is critical to winning this fight; it is entirely too easy for them to stunlock you until the Capra Demon lands a killing blow. If he follows you up the stairs before the dogs are dead, feel free to drop down and get a bit of distance from him and make another attempt.
2. Once the dogs are dead, back up along the narrow stone bridge at the top of the stairs. Don't go all the way to the wall, because the boss will crowd you up there. He may not hit you there, but it can be dangerous. Remember to guard. If you are not all the way at the wall, he should jump from the beginning of the stairs and miss entirely. If you have firebombs or magic, this is the time to use it, but be careful not to fall off the bridge.
3. If you run out of firebombs (or choose not to use them in the first place), the best thing to do is lure the boss all the way to the top of the stairs. Guard with your shield and wait for him to swing a few times and get really close to you. Then you can get in a few swings with your weapon before he falls off. If you fall off with him, run back up to the top of the stairs. Rinse and repeat until he dies.
If you feel like going toe-to-toe with the demon after killing the dogs, just keep a close eye on his attacks. The two-sword swing can't be blocked entirely; avoid it and you may be able to get a hit off before he recovers. His leaping attack is also useful for getting in a hit or two since if you're at close range and manage to slip to the side his back will be to you.

As above, run around the Capra Demon and up the stairs, killing the dogs as soon as possible without taking damage from the boss. Also as above, run right so that you are standing on the narrow shelf. Try to stand in the middle of the ledge, and keep in mind that the demon may follow you. Let him come up if it does so, but drop down and run when it is out on the ledge with you. In most cases the demon will drop down after a couple seconds and attempt to follow you. If you run back up the stairs as the demon drops down, however, it will (ideally) turn and try to face you; being "stuck" for a moment as it attempts to maintain its targeting. As you run back up, the demon may attack. This attack will most likely miss, as it will be aiming for a spot behind and below you. Be ready to block, though, if it looks like the blow is going to connect. Once on the ledge again the demon will be right below you, vulnerable to a plunging attack (RB + above enemy). Rinse and repeat this strategy to make short work of the boss. Here are some further tips to make this fight as easy as possible:

Unlike the two above strategies, which rely on mobility and running up the stairs, this strategy relies on having a good shield with the highest stability you can manage. By this point in the game, you should be able to obtain a fairly good shield - the three best options at this point being the Black Knight Shield (if you were lucky enough to have a Black Knight drop it), a Balder Shield (which you can farm from Balder Knights in the Undead Parish), and the Caduceus Kite Shield (which you can buy from Andre of Astora). Whichever of these you can find, choose whichever one you can get to have the highest Stability (upgraded to +5, the Balder Shield is better than the Caduceus Kite Shield, but not by a lot, and if you have found enough Twinkling Titanite to get the Black Knight Shield to +3, it beats out the other two).

So, now that you've prepared a good shield, wear the heaviest armor you can. The Stone Knight Set is good - if you've already visited Darkroot Garden - otherwise, just equip the heaviest, most physically-defensive armor you can; for this strategy, you want to pretty much stand still at the fog door, so mobility really isn't necessary - but defense and poise can keep you alive if you don't manage to block an attack in time.

As for rings, the best choices are probably the Ring of Favor and Protection and the Blue Tearstone Ring. These should help to keep you alive. One might think of equipping Havel's Ring, but it really isn't helpful for this fight, since you don't need to move much.

Now, as for weapons, the Drake Sword is probably the best option, but if you've found anything that does more damage that you can effectively one-hand, use it. Ideally, you want to be able to kill a demon dog in one swing or else they can overwhelm your guard.

So, now that you're ready, here's what you do:

Additional groups of Capra Demons can be found in Demon Ruins.
Once you've beaten Ceaseless Discharge in the Demon Ruins and the lava lake has hardened, On the far right side there is an area with several Capra Demons. If you manage to make it past all of them and to the bonfire below them, you can rest there and kill the demon closest to the bonfire a lot (if it's easy for you). If you die you spawn right there so no need to travel for long just to get your stuff back! It can be a long process but it can also be effective for gaining decently easy experience. The Capra Demons in the Demon Ruins are (like many demons) very susceptible to poison arrows, and can be killed at range with just a few poisoned arrows if one has the patience.