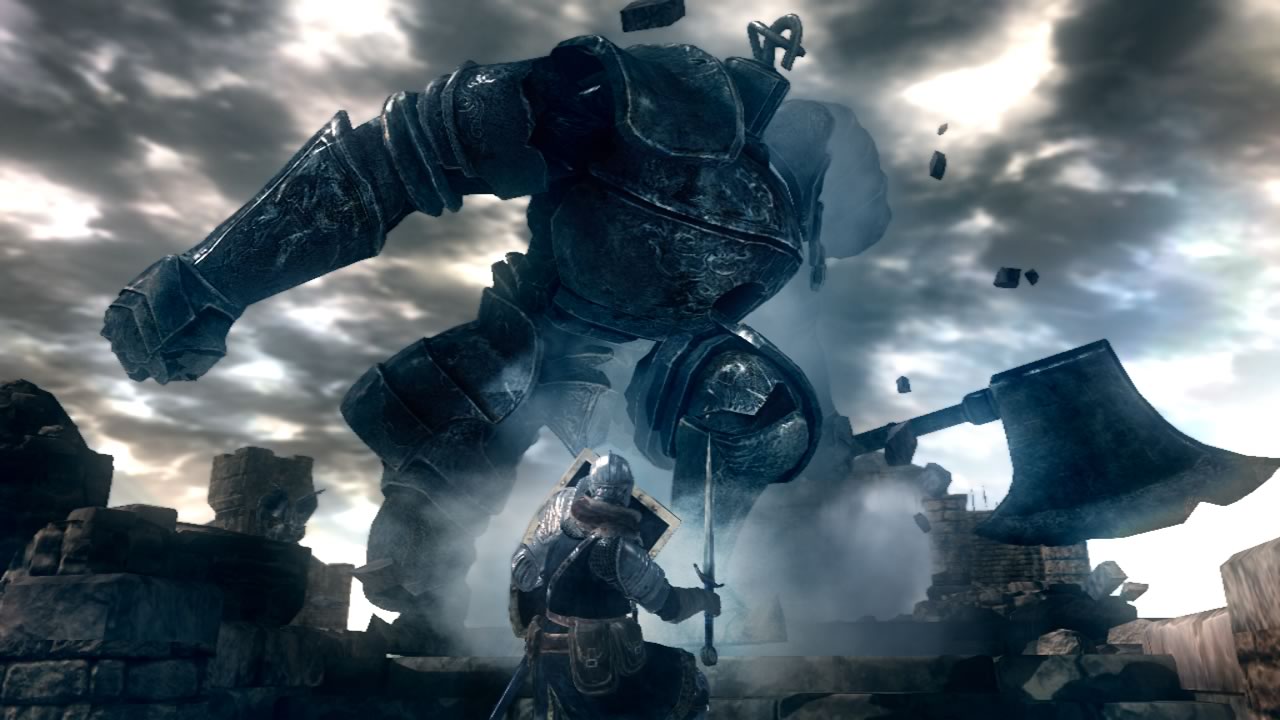 The last trial of Sen's Fortress, the Iron Golem. The boss is located on a bridge at the top of the fortress, and must be defeated in order to reach Anor Londo.

Make sure to kill the Firebomb Giant atop the tower first, by ascending the stairs in the same room as the fog gate. If you do not, he will start throwing huge firebombs into the fight with the Golem, making it much more challenging.

When you start this battle, you will be on the opposite end of the area from the Iron Golem. Take note of where the Iron golem begins; it is on a narrow path with sheer drops on either side. Hurry over to it, and get ready to attack.
You will need all the power you can muster here, and blocking will be challenging as the Golem's swings will eat up large amounts of your stamina. Consider putting your shield away and going in two-handed. Immediately move through the Iron Golem's legs and start attacking his back heels. You need to be careful of certain attacks while here, in particular the Grab and Sweep (he grabs back through his legs, so don't go thinking you're invincible back there). Getting hit by either of these could result in you being knocked off the platform yourself, killing you. Nevertheless, you should stay positioned behind either the Iron Golem's right or left foot. While here, you must attack as often as possible, concentrating you attacks on one leg if possible. If you can do enough damage to a foot in a short enough span of time, the golem will start wobbling. This is the signal for you to keep piling on the hurt; do this enough and the Iron Golem will trip and fall over backwards. If you can make this happen on the narrow strip of platform where the Iron Golem first appeared, he will fall backwards off the platform and die instantly. A higher-leveled hero can weather his blows with a tough shield and slog it out blow for blow. Someone with good timing and a lighter weight armor could play the maneuverable route and dodge and dive for the victory as most of his attacks are well-telegraphed. 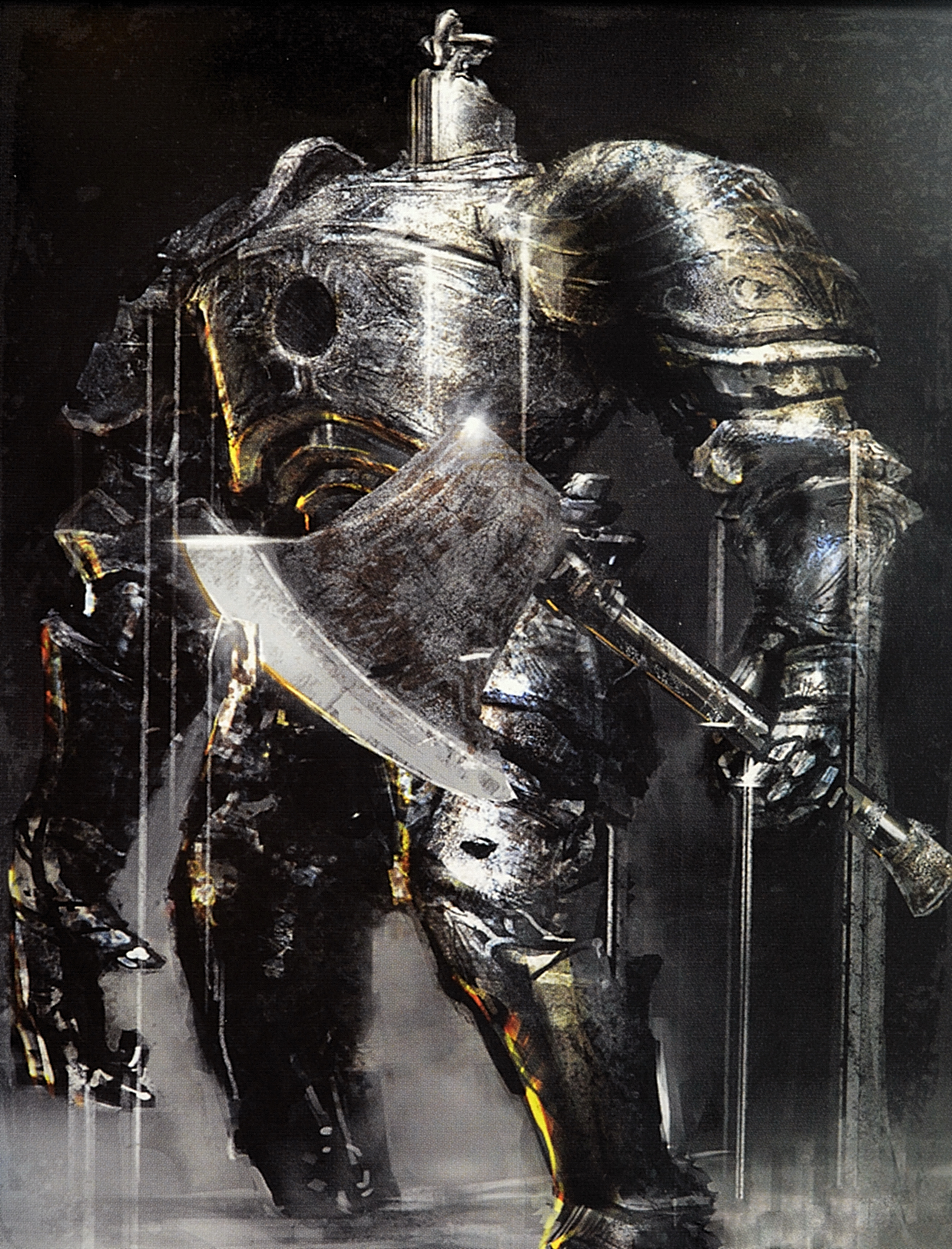 Note that a spear will probably hinder you here (you might be considering using the lightning spear you just picked up), as many of your attacks may whiff harmlessly at the nothing between his legs.
Video Strategy SL1 (skip to 22:25): 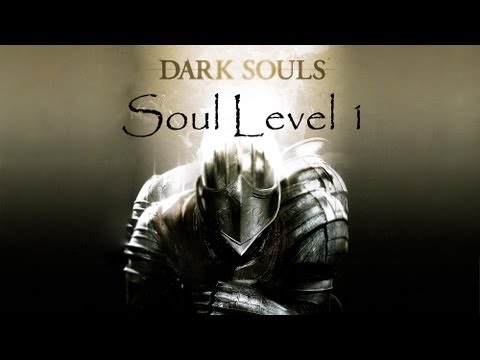 Easy Melee Strategy: Just lock on him and when he raises his axe to hit you just roll FORWARD between his legs and hit his legs a few times. He will try to turn and hit you again but just keep rolling through his legs. He will fall down when his health is very low and then you can just end his misery.
Watch out his other left foot cause sometimes he tries to crush you with it and forget the shield in this fight. No need to block.

Easy Strategy (All Classes)
When fighting the golem you can hit his legs (As stated above). If you make him fall to his knees while he is near the egde it can make him fall down from the platform, thus giving you a very easy kill.

Magic users
A good tactic for magic users is to get in range and just spam him with magic. When his attacks are getting into range just run through his legs and spam more magic. It'll take a little bit of time because he has so much health but if you keep at it you won't get hit once during the battle.

Asylum Demon Hammer Stun-Lock Strategy
If you took the time to invest in the Asylum Demon Hammer, it is extremely useful against the Golem. The best strategy to use is to simply hit the Golem once, this will put the Golem in a stun state and he will be unable to do anything while you attack him, resulting in a sound beating.

Firebomb Giant Strategy (tested on PC, not confirmed )
Before approaching Iron Golem, DO NOT KILL Firebomb Giant on top of the tower. He will prove to be very useful while fighting Iron Golem. Just stick to beginning of the bridge, and let Giant throw bombs at you. He'll miss, and hit Iron Golem, which is much bigger than you. One firebomb takes ~200 of Iron Golem's HP, so you just stick to blocking and dodging. Summoning Iron Tarkus will provide additional help.

In the tower to the right of the boss fog wall, over a small bridge, you can summon the phantom Iron Tarkus to aid you in the battle against the Iron Golem, assuming you are in human form of course.


Notes: It was possible to activate the ring during the boss fight, if you stood on top of it after the Iron Golem crushed the rocks around it. The ring was invisible, but could still be activated to proceed to Anor Londo without killing the boss. This glitch was fixed in a patch.